Turkey has shown through its capabilities that it is one of the most powerful countries in the world during the period of combating the virus , and the Turkish government has stated that it was a pioneer in the fight against this epidemic , in recent days , Turkey has increased the number of people recovering from the Corona virus compared to the numbers of infected people , it has controlled the spread of the epidemic and made great efforts to preserve the health, safety and security of citizens and residents in Turkey , while maintaining the integrity of the economy and production within the country .

Economists expect that the recovery of the Turkish economy will start from the second half of 2020 , after the negative effects of the Corona virus locally and globally , especially in the sectors of tourism , industry and exports .

And once the daily and commercial life returns to normal , the Turkish economy , thanks to its dynamic structure , will be able to overcome the decline within a short time .

It is worth noting that the measures of the Ministry of Finance and the Turkish Central Bank have succeeded in alleviating the consequences of the virus outbreak on the local and financial economy of the country , by pumping liquidity into the markets and intervening to protect them .

To counteract the negative impact of the pandemic on the Turkish economy , the central bank has taken a number of measures , the most prominent of which is lowering interest rates to pump much-needed liquidity into the markets , and improving the cash flow of companies .

Abdulmutallab Arba , the Turkish economist and head of the economics department at the Turkish University of Sabah Al-Din , the leader of the Turkish government , spoke in a dialogue with the " New Arab " ,  about the impact of Corona on the Turkish economy and the role of the government in dealing with the repercussions of this crisis , and said that the Turkish economy has the strengths and the ability to face crises through 3 facts : The first is the diversification of the areas of economic activity between agriculture , industry and services of all kinds with a total output value approaching one trillion dollars annually , which pushes us to an advanced position in the group of twenty countries .

Second , the big domestic market ; we approach 85 million citizens and residents plus 50 million tourists annually with an average Turkish per capita income of close to $ 12.000 annually .

Third , open markets for export to all parts of the world . The volume of foreign trade has grown to more than 400 billion dollars annually , in the manner that led to a surplus in the balance of payments during the month of January .

In terms of the government's rapid and positive interaction with the repercussions of the current crisis , President Recep Tayyip Erdogan has already presented a package of economic measures and decisions to support economic activity in this period ; such as stopping the collection of taxes , delaying the repayment of loans 6 months , and supporting companies and grants loans to small and medium-sized companies without interest from the State Bank , to pay insurance for workers affected by the crisis , to raise pensions to 1500 Turkish lira and to deliver salary to homes , in addition to applying a health system for the elderly .

Also , the devaluation of the local currency exchange rate against the dollar leads to a noticeable increase in exports and foreign investment . Therefore , the exchange rate of the Turkish lira against the US dollar has significant positive benefits .

To follow the Corona news in Turkey , visit the page : Coronavirus

Turkey is preparing to get back to normal life 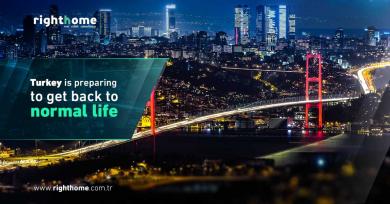 Steps to buy a property without being in Turkey 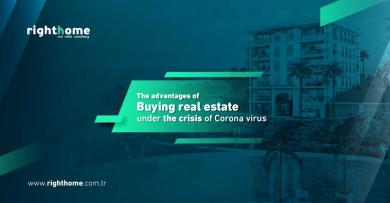 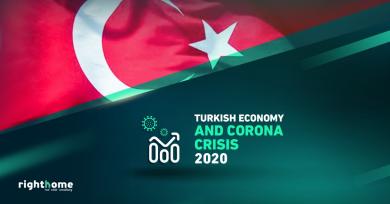