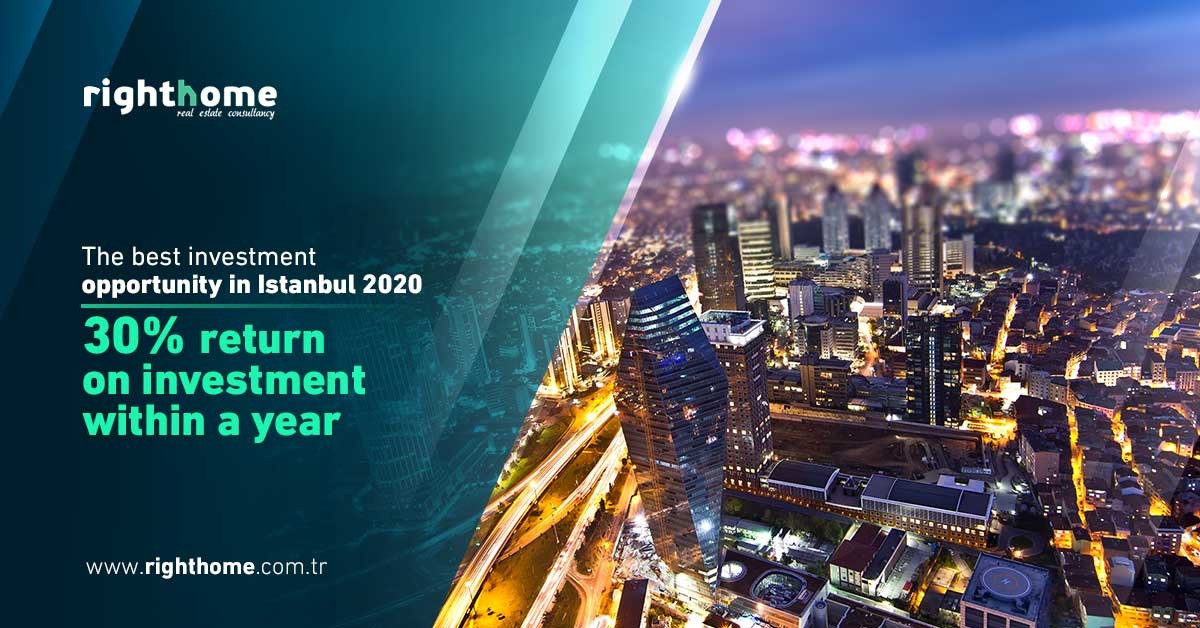 The best investment opportunity in Istanbul 2020, 30% return on investment within a year

The real estate sector in Turkey in general and in Istanbul in particular always holds profitable and encouraging investment opportunities, but when we talk about Istanbul alone we have hundreds of projects under construction and thousands of ready projects spread in all areas, so how can the best investment opportunity really be found?

The investment property always has specific conditions that differ from the residential property, which we talked about in our previous articles, and we will mention it here in points:

• To be in a position of great demand and thus easy to sell at the end of the investment plan.

• To have a positive and high return on investment.

• That the investor realizes the value of the property in which he invests and how to profit from it.

To facilitate the process, we at Right Home have divided Istanbul areas into sectors, each with its own characteristics and advantages, you can view it in detail here.

Maslak: A new area with enchanting views of the Belgrade forests and with a distinctive advanced transportation network.

Coastline in Zeytinburnu and Bakirkoy: It includes 9 projects with a direct view of the Sea of Marmara, and has very luxurious, elegant, and spacious apartments.

Beyoglu: A central archaeological area that includes Taksim Square, Galata Tower, Istiklal Street, and hundreds of hotels, making it the first destination for tourists from all over the world.

Sisli: A central area mediating Beyoglu, Maslak, close to the Bosphorus, and containing a few projects under construction.

In our article today, our goal is to find the best investment opportunity to achieve rapid profits by up to 30% in one year.

As for the capital increase, it is confined to investment projects in the center of Istanbul, because the demand is many and the supply is small and therefore this percentage rises as we get closer to the Istanbul center but it increases dramatically if the project in the Istanbul center is under construction and will be ready after a year or less, here we are talking about the capital increase at least 30% in one year only.

Here, there is no value for the rental return, which will be (6% or 7%). The importance lies in the fact that the project is under construction, and here we are talking about increasing the capital by a high percentage without collecting any rental return.

Here, the next question will immediately come to mind: What is this project, and what are the pillars on which to assess this high percentage in just one year?

To answer this we say that the greatest importance lies in the location of the project, let alone if the project itself also has many advantages that qualify it to be the highest project return on investment in Istanbul 2020.

Which is characterized by the following:

These features in terms of location and the project itself will not give the entire project the detail it deserves and therefore we recommend that you contact one of our representatives to provide the videos and full specifications. 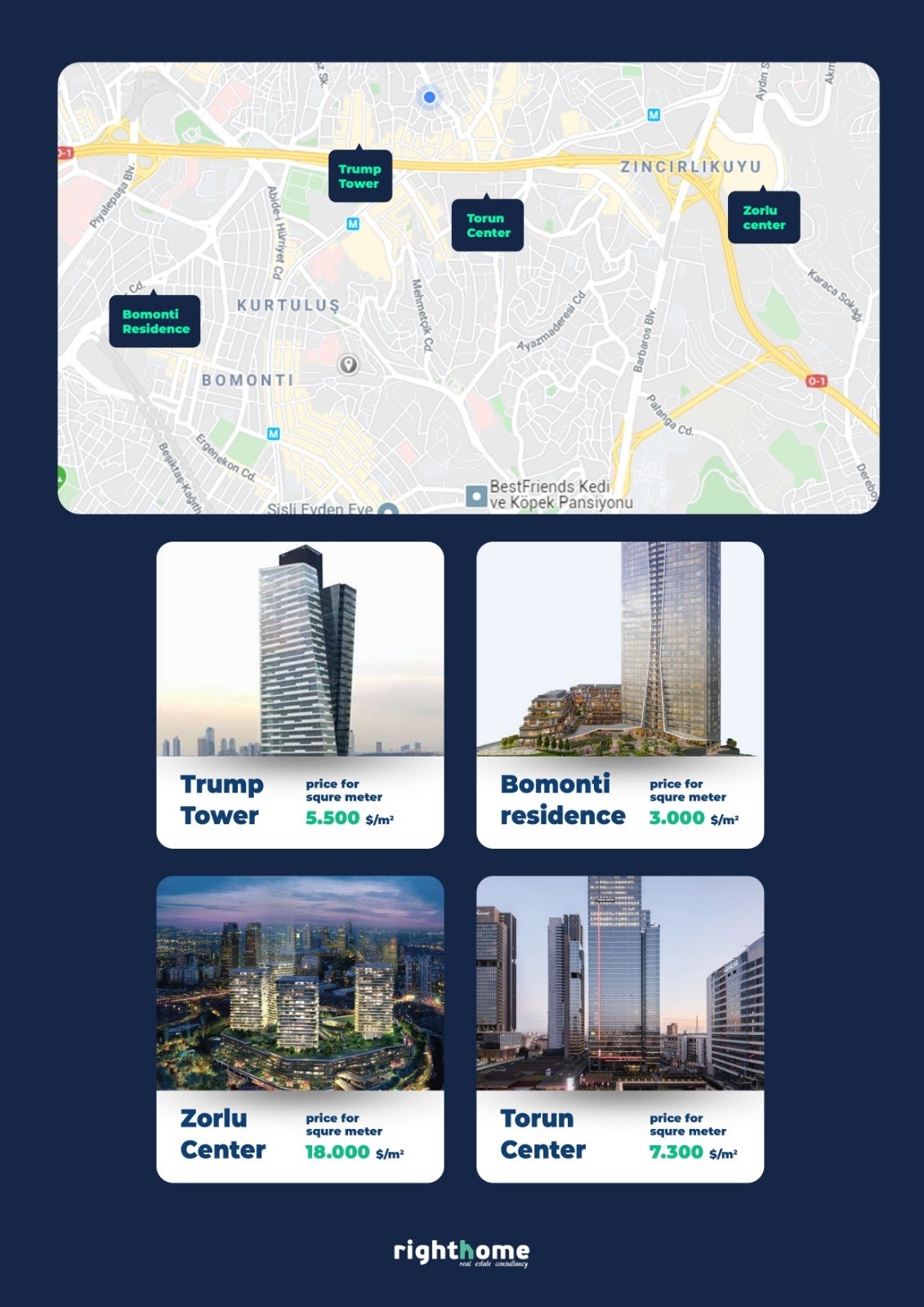 We compared the Nida Park Bomonti project with 3 ready-to-live projects near it:

These three ready-made projects undoubtedly have their advantages from a strategic location and quality in interior and exterior cladding. We will not get into talking about the advantages of each here so that the article does not last long.

Now, let us finally move on to discuss the Bomonti region in detail and its adjacent neighborhoods.

Note: wikipedia was used to introduce this paragraph

Until the 1800s, Şişli was open countryside, used for hunting, agriculture and leisure. It was developed as a middle class residential district during the last years of the Ottoman Empire and the early years of the Turkish Republic (the late 19th-early 20th centuries). French culture was an important influence in this period and the wide avenues of Şişli were lined with large stone buildings with high ceilings and art nouveau wrought-iron balconies, and which often had little elevators on wires in the middle of the stairways. This trading middle-class was composed of Jews, Greeks and Armenians, as well as some Turks, many of whom built homes in Şişli after a large fire devastated the neighbouring district of Pera (now Beyoğlu) in 1870. To this day, several families from Istanbul's local Armenian community live in the Kurtuluş neighbourhood of Şişli. The area was also popular with the Levantine trading families of this period who settled in Istanbul for trade or were contracted by the Ottoman Empire. Şişli attracted migrants from former possessions in Greece and the Balkans. In the late 19th century, Şişli was one of the first areas supplied with tramlines, electricity and natural gas. The Darülaceze orphanage and the large Şişli Etfal Hospital were built here in this period, as well as the French schools of St. Michel and Notre Dame de Sion.

Following the founding of the Turkish Republic in the 1920s, larger and larger buildings were built along wide avenues such as Halaskargazi Caddesi, the main road that runs through the middle of Şişli, with its little arcades of shops below tall buildings of apartments and offices. In the republican era, the area was still the residence of the middle-class, as well as traders there were now writers and poets and Şişli acquired theatres, cafes and other cultural amenities. The Hilton Istanbul Bosphorus was built here in the 1950s and many others followed.

The centre of Şişli today

Now that the wealthy elite of central Şişli have moved further out of the city, the large buildings on the grand avenues are occupied by offices, banks, and big shops. Since the 1970s most older buildings have been pulled down and replaced with newer, and perhaps less remarkable, multistory structures. The back streets are still residential, and many working-class families and students have settled here. As in most parts of Istanbul, the number of people living and working in these blocks challenges the existing infrastructure; for example, competition for parking spaces is intense, and traffic during peak hours can come to a standstill.

Being a central area well-served with public-transport and other infrastructure, Şişli is a center of trade and shopping. The main road through Şişli up to the skyscrapers of Mecidiyeköy, Gayrettepe, Levent and beyond is now lined with office blocks. Europe's largest and the world's second largest (urban-area) shopping mall, Cevahir İstanbul, is situated here. Due to Şişli's middle-class past and the enduring quality of some neighbourhoods the area is home to many upmarket shops mainly in the stylish and charming Nişantaşı area. Parking is an enduring problem, especially in the narrow side-streets.

People also come to Şişli for schooling; this city-centre area has some well-known high schools and a great number of dersane (preparatory courses for the annual university entrance exams), evening and weekend schools where people come to cram for university or high school entrance examinations, or to learn English.

There are many well-established cafes and restaurants, including fast-food for the students and shoppers.

Esentepe - home to the Municipality of Şişli and Zincirlikuyu Cemetery. Neighboring Gayrettepe and Levent neighborhoods of Beşiktaş district and Mecidiyeköy neighborhood, Esentepe also covers the west side of Büyükdere Street at Levent, where most of the plazas are located.

Kurtuluş – known as Tatavla (Greek: Ταταύλα, "horse stable") in the Ottoman period, was home to a Greek and later Armenian community. The district had mostly wooden houses until 207 houses went up in flames in a huge fire on April 13, 1929. After the fire, it was rebuilt in narrow stone streets and, over time, concrete buildings, lined with cafés, patisseries, and shops. This cosmopolitan district has a long history, and has been home to many singers, artists, and actors. There are a small number of attractive old apartment buildings, but most of those built since the 1960s are ugly and crammed together. It was also known mainly for its traditional carnival, which was organized every year before Lent. The peak of the carnival, on the last day of Lent, took place in Kurtuluş and was known as Baklahorani.[7] After the riots of 1955, the Greek community left the area; however, their churches are open on religious holidays. Recently the district, like many other historic neighbourhoods in Istanbul, is being revitalized with mass restoration projects, in which historic buildings are repaired and painted, while the "modern" (characterless) concrete façades are restyled to look more in line with historic architectural characteristics.

Teşvikiye – uphill from Beşiktaş, an old-established smart area with many classic European-style buildings as well as a busy high-class shopping district, Teşvikiye is one of the most attractive residential neighbourhoods in Istanbul. Since the 19th century, Teşvikiye has been home to many writers (including journalist Abdi Ipekçi, who was assassinated here in 1979), politicians and a great number of prominent business families and still holds a well-established middle-class, including some descendants of Levantine and Jewish families that built many of the beautiful stone apartment buildings of Teşvikiye in the Ottoman period. Prominent buildings include the Milli Reasürans building (this one does not have an ornate 19th century stonework façade but is one of Istanbul's best examples of modernism) and the ornate neo-Baroque Teşvikiye Mosque, built by Sultan Abdulhamid II, who established the neighbourhood by building this mosque and the nearby historic Teşvikiye Police Station, encouraging citizens of Istanbul to settle in this new district (hence the name Teşvikiye, which means encouragement in Turkish.) Among the shops of Teşvikiye lies Gerekli Şeyler, Turkey's specialist importer of fantasy and gaming publications including Star Wars, Marvel Comics and Wizards of the Coast. Pretty, narrow streets of 19th and early-20th century buildings housing expensive boutiques, parfumeries, art galleries and cafés. Some of these buildings are architectural masterpieces; one of them, the historic Maçka Palas, houses Istanbul's Gucci and Armani stores as well as Armani Café. Nişantaşı also has many stylish pubs and restaurants. Abdi İpekçi Avenue, Turkey's most expensive street in terms of lease prices, is located here. There are a number of well-known schools here too, including some buildings of Marmara University and Işık Lisesi. Parking is a problem.

Nişantaşı – neighbourhood encompassing Teşvikiye, famous for its many Art Nouveau apartment buildings. The American Hospital, one of the city's best hospitals, is also located here.

Okmeydanı – north of Şişli, home to some large hospitals. This was the archery practice ground of the Ottoman armies (which is the meaning of its name in Turkish), and an Ottoman mosque was built here. Later the land was planted with fruit trees, and in the 1960s turned over to developers for building as the city expanded. Darülaceze, the Ottoman-period orphanage, is here, built in 1896.

Kuştepe – a gecekondu (illegally built) district of poor housing traditionally occupied by the Romani community and recent migrants from the countryside. In transformation since the Bilgi University opened a campus here.

Pangaltı - home to Saint James Armenian Hospital and Cathedral of the Holy Spirit.

Cathedral of the Holy Spirit

What are the advantages of residential compounds in Istanbul? 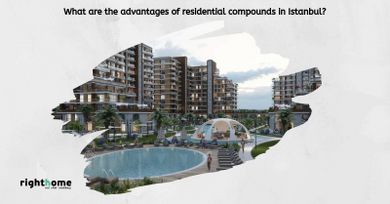 Eritrean can own real estate in Turkey now! 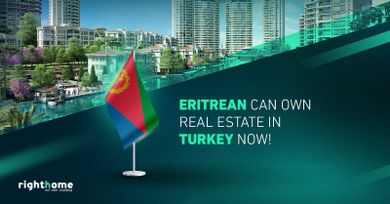 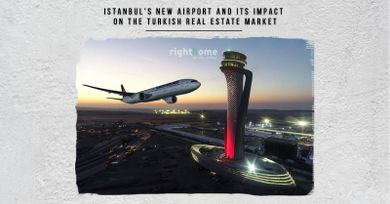 property for sale in Taksim 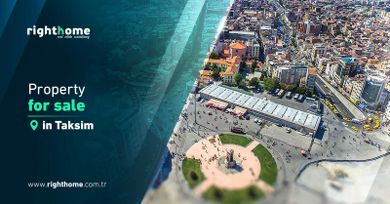